The Carol: A Talking Portrait exhibited at the 2007 One Minute Film Festival of Aarau Switzerland.

The Carol: A Talking Portrait video was exhibited at the One Minute Film Festival of Aarau Switzerland  in August 17-19, 2007. 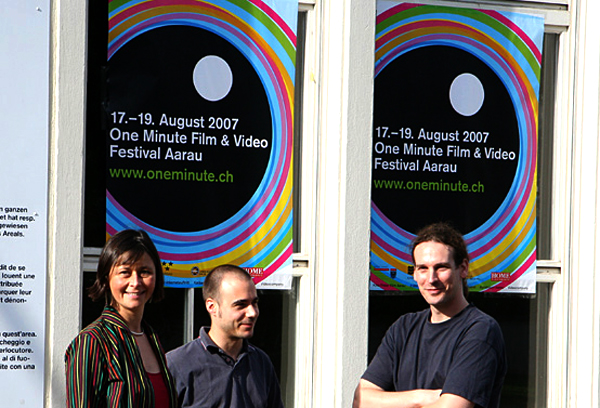 Aarau is the capital of the northern Swiss canton of Aargau. The town is also the capital of the district of Aarau. It is German-speaking and predominantly Protestant. Aarau is situated on the Swiss plateau, in the valley of the Aare, on the river’s right bank, and at the southern foot of the Jura mountains, and is west of Zürich, and 65 kilometres (40 mi) northeast of Bern. The municipality borders directly on the canton of Solothurn to the west. It is the second-largest town in Aargau after Wettingen. At the beginning of 2010 Rohr became a suburb of Aarau. The official language of Aarau is German, but the main spoken language is the local variant of the Alemannic Swiss German dialect.

Albert Einstein (1879–1955), scientist. In 1895, at the age of 16, Einstein sat the entrance examinations for the Swiss Federal Polytechnic in Zürich. He failed to reach the required standard in the general part of the examination, but obtained exceptional grades in physics and mathematics. On the advice of the principal of the Polytechnic, he attended the Argovian cantonal school in Aarau, Switzerland, in 1895–96 to complete his secondary schooling. While lodging with the family of professor Jost Winteler, he fell in love with Winteler’s daughter, Marie. In January 1896, with his father’s approval, Einstein renounced his citizenship in the German Kingdom of Württemberg to avoid military service. In September 1896, he passed the Swiss Matura with mostly good grades, including a top grade of 6 in physics and mathematical subjects, on a scale of 1–6. Though only 17, he enrolled in the four-year mathematics and physics teaching diploma program at the Zürich Polytechnic. Marie Winteler moved to Olsberg, Switzerland, for a teaching post.